Why We Suffer OR: In which my husband vomits under water

About a hundred years ago – pre-marriage, pre-kids – Murray and I did a scuba diving course with a bunch of friends. We headed to Sodwana Bay one weekend to do our Open Water qualifying dives.

Day one – dive one – the sea was choppy. It was a miserable morning, but safe enough to dive. So out went our boat in a billow of petrol fumes, laden with masks, tanks, BCs and queasy beginners. 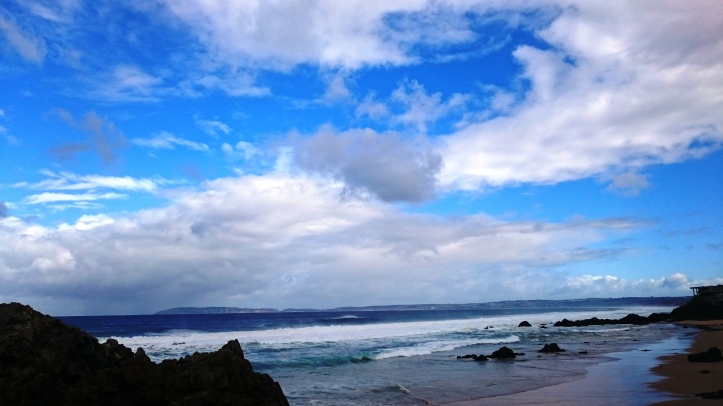 When we got to the dive spot, our dive master cut the boat’s engine so we could gear up to do that cool flopping over backwards into the ocean thing.

But because we were rookies, he made absolutely sure that everyone knew what to do and when to do it. We painstakingly rehearsed all the who’s-your-dive-buddy checks and how not to get the raving bends from too much nitrogen or whatever.

While the boat heaved on the waves.

Motion is not Murray’s friend. In the backseat of a car he goes a strange translucent whitish-green. He would rather chew broken glass than ride a Ferris wheel.

So even gently bobbing on a calm sea is bound to end badly. And here we were. Bobbing a lot. Even me – stomach of steel – I said byyyyyye to my breakfast that day. But we were doing this thing – nodding bravely at all the safety instructions. Trying to pull off blasé but really just feeling blaah in our exceptionally unattractive borrowed wetsuits.

[Aside: When Murray still wanted to marry me after seeing me in neoprene, I knew it was true love.]

Eventually we got to the flopping backwards overboard part and it was game on. Murray played the game by continuing to throw up under water. I was not a very attentive girlfriend. I was mesmerized by the reef, the fish, the distant sunlit surface above us… But did wonder fleetingly what the muffled roars were all about.

A long time later – back on terra firma but bent double with nausea – Murray rasped out, ‘Dee! Tell everybody to stand still!’ I glanced around the beach. There was sand. And a handful of tranquil tanners. The scene was utterly motionless. I explained that, um, only his world was spinning.

But I’ve often thought back to what our dive master told us on the boat.

‘Look at the horizon,’ he kept saying. ‘Keep your eyes on the horizon and you won’t get sick.’

It worked. When I steadied my gaze on the distant shore, my gut-restlessness eased. But when I looked down into the boat to fumble with masks and regulators, the nausea surged back.

And I think there may be a worldview in this.

When I’m navigating the storms of life – about to dive out of a comfort zone into rough water – I mustn’t look down into the boat where the waves crash over my feet and my fears. I should never look down because it makes me sick and that helps no one.

Also, when I look down and ask, Why God? Why this weather? Why this storm? Why now? – I’ll seldom find answers in the boat.

Sometimes, God gives us a glimpse of why He has sent-slash-allowed a trial. You see His glory even in the mess – even in the puke on your wetsuit. Sometimes, there are shiny-happy stories.

God allowed Murray to throw up through his regulator, so we saw tons of fish! It was a beautiful experience!

God allowed my friend to get cancer, and because of her faith through that ordeal one of the nurses in the oncology ward came to know Jesus.

I’m not knocking those stories. If you’ve got a shiny-happy story to tell of how you saw God’s goodness in the land of the living, please-please-please keep telling that story because it puts wind in our sails.

But often, there aren’t shiny-happy stories.

Often, because the story of our suffering is just a few sentences in an intricate, sweeping, deeply meaningful and totally un-random plot, it seems pretty random, inefficient and ineffectual.

So to make sure I don’t get sick trying to make sense of suffering, I must look up.

And I must look far.

I must look to the horizon of history remembering that all our stories are connected by three big landmarks:

In the Beginning. Meanwhile. And in the End.

Because in the Beginning the world was awesome, and then it wasn’t. The humans did a dumb selfish thing. They fell into sin and they took all creation with them. That wave of sin has rolled on and splashed over the bows of boats causing havoc and trauma, disappointment and grief and ordinary lousiness, ever since.

What happened back then is responsible for our Meanwhile. That’s where we are – in the middle bit of the Big Story. We’re in a broken world where crazy, terrible things happen. People do nasty stuff to each other. There are viruses and deformities. There’s poverty, greed and ghastly fonts like Comic Sans. No matter what dreadful weather has washed in over your life, it’s part of the big Meanwhile.

Jesus came in the midst of the Meanwhile. He came to show us that the currency of the Kingdom is sacrifice. As believers, that’s what we trade in. It’s our rich inheritance.

And because Jesus laid all His cash on the table – showed us how we should be spending our lives too – He made possible the thrilling hope that in the End – oh man, in the End! – God will roll up all of history on that final shore. He will refresh and restore and renew all things and it. Will. Be. Glorious.

That doesn’t mean our wetsuits won’t chafe. It doesn’t underrate the horrors, regrets or sad anticlimaxes we face today. It just gives us courage to keep our eyes on the horizon knowing for sure that everything really will be OK in the end – in the very End –

Because for us the end is just the beginning.

Have an awesome weekend!