Courage doesn’t feel as cool as it looks. And that’s cool.

For six weeks – the length of his summer holiday – we tried to dissuade our low-vision kiddo from signing up for cricket.

We were blunt. (Brutal?) We told him the unpolished truth:

This was hardball, hardcore cricket. No one was going to roll the ball politely up to his feet. This was about boys taking catches and wickets and screaming howzaaaat! This was about his friends actually wanting to, um, win.

We rolled our anti-cricket pitch as hard as we could but Cameron dug his heels deeper. Come hell or heat wave, he was playing cricket.

He’s got a bit of denial going on, born of wanting to be like all the other boys against all odds.

But he’s also got this die-hard can-do irrepressible optimism that we dare not crush because it’ll take him far in life – against all odds.

We vacillate between rationalizing that we should never stop him trying anything, and freaking out because are we totally insane sending him onto a cricket field wearing hopes, dreams and a helmet – knowing he’ll likely get his heart – and possibly his face – broken?

When do you cheer for your kids – let them have a go at absolutely everything – and when do you tell them the truth about their limitations?

But it seems courage would whisper a determined and terrified, Yes.

Like, it’s a little terrifying when your kid sobs wet into your shirt that he’ll never be like other kids and you’re the grownup who’s supposed to have answers but you’ve come to the end of your wisdom, your good ideas, yourself.

And it’s a scary kind of happy freedom to release him with the brave truth that he’s right. He won’t ever be like other kids. But he can have a crack at whatever it looks like to be the best version of himself, which is, marvellously, his only and highest calling.

So last Wednesday (after cricket practice) – in an effort to channel our boy’s passion and potential in the direction of hope – we joined our friend Julian and his girls at a climbing wall.

Ropes and harness in hand, Julian said matter-of-fact to Cam,

I think Julian was right.

It sort of instantly became one of Cam’s favourite things to do. He’s a freakin’ natural. 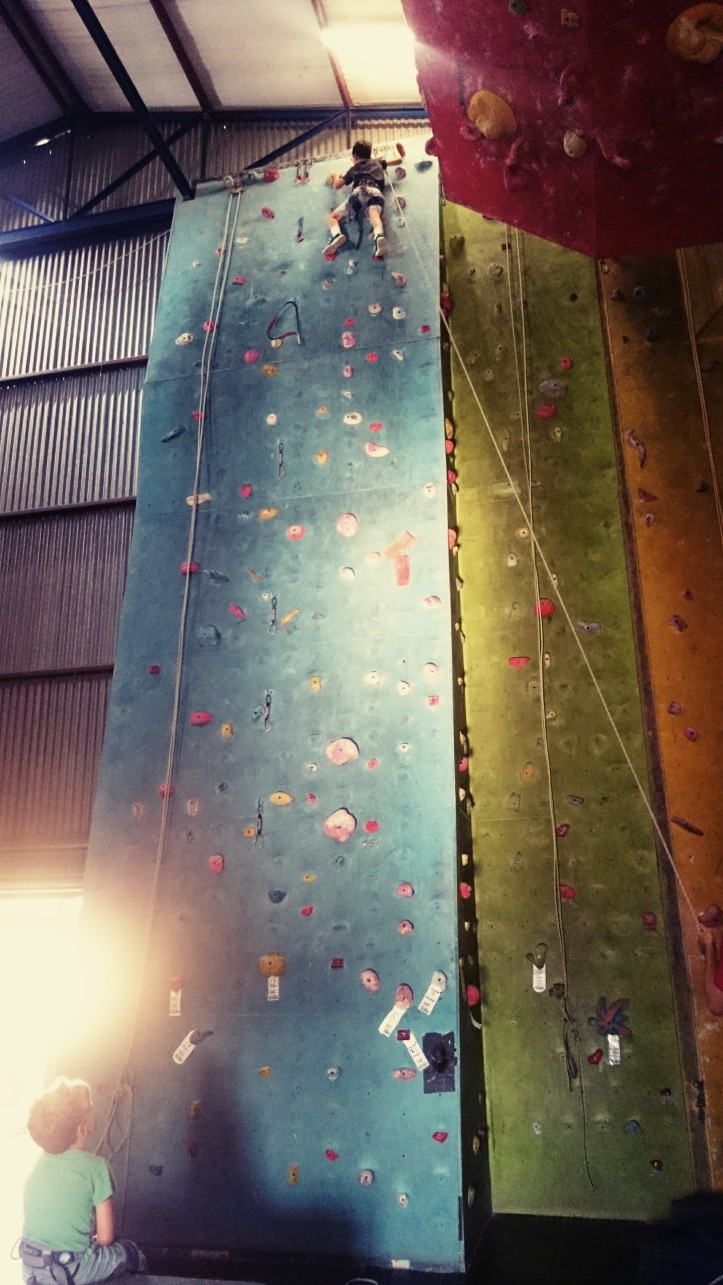 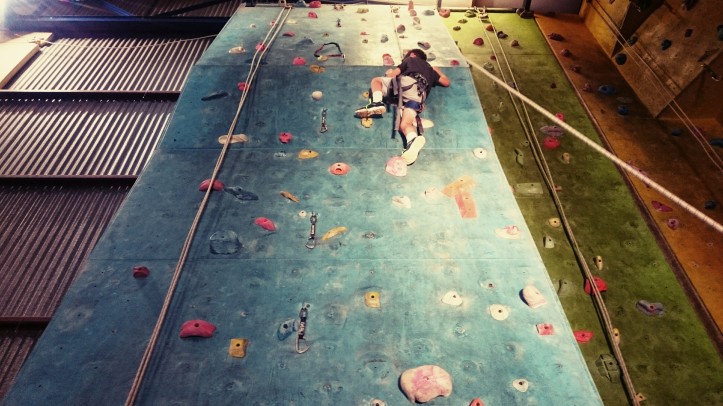 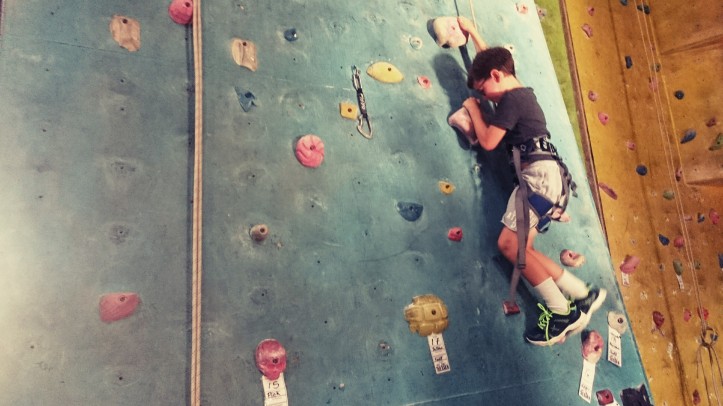 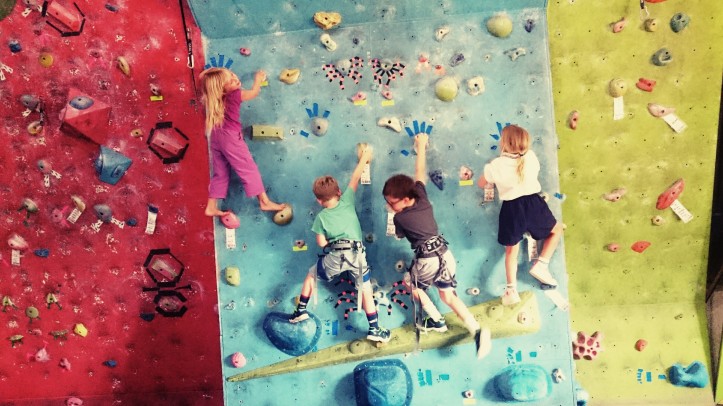 Yet this same kid who scales walls and risks concussion on a cricket field wrote on his all-about-me worksheet that he needs to work on his courage. 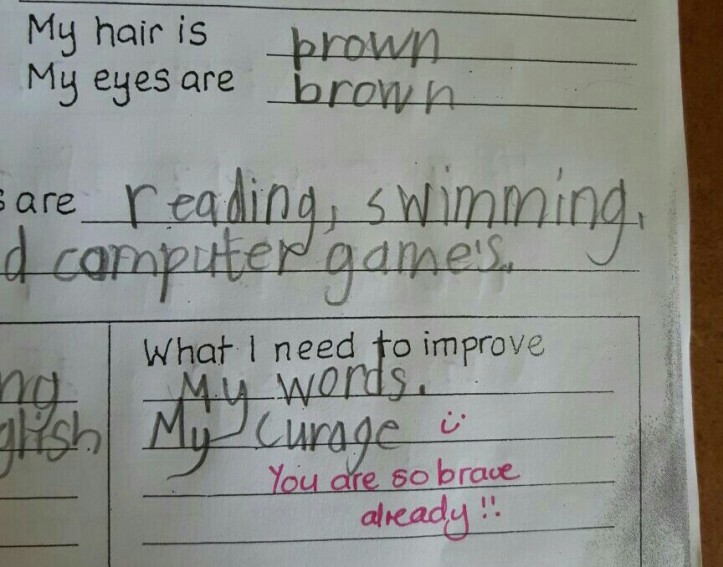 Because sometimes he’s scared. And he thinks being scared means he isn’t brave when really, brave only ever happens with simultaneous fear.

And what we actually need to get comfortable with is the idea that courage looks fearless and feels fearful, and that’s just fine.

I’m also learning from Cam that without humility, courage never gets off the ground.

It’s humility that fuels the bravery that risks rejection and failure.

It’s humility that strengthens us to muscle through terror – to do it anyway – because humility means we’re not so very much invested in saving face.

When He went to the cross, Jesus was terrified. But the courage it took to die for people who hated Him – to fight for our hearts and not for His dignity – that took more than pushing back fear; it took mind-blowing humility. It was the bravest, scariest, humblest act in history.

And it’s possible that – as kids, as parents – we’d be much braver – much freer – if we remembered it’s not about us.

Maybe that kind of terrified, humble courage would have us signing up for all kinds of crazy wonderful.

So lovely to have you reading here today – thank you. 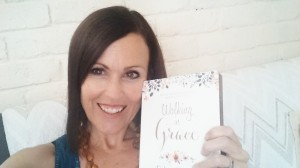 *Excited* to hold this book-baby in my arms at last! A sneak pre-release copy from the good folks at Christian Art Publishers.

If you’re in the USA, order Walking in Grace here.

If you’re in South Africa, order Walking in Grace here. 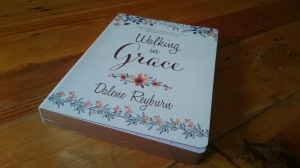 And look out for it on store shelves  (and worldwide on Amazon) sooooooooon!

Here’s what’s on the menu, if you’re reading this in an email: