Scott was so sure that they guys on the corner of Atterbury and Selikats Causeway should get his ‘give money’. We pass them every morning on the way to school. In winter they sit around fires of anything that burns. In summer they sit on plastic Coke crates and wait. He asks a lot of questions about them. And when I asked him last week what he wants to be when he’s big, he didn’t say game ranger, chef, farmer or saxophonist, as he sometimes does. He said:

‘When I’m big I want to make it that there are no more poor people in the world.’ 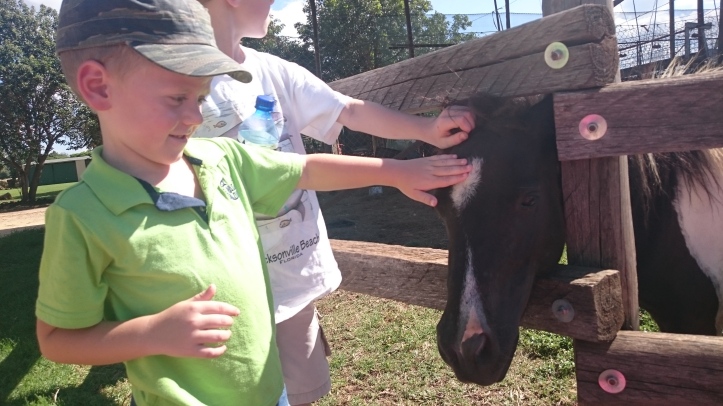 I thought it would be so patronising for a five-year-old to hand over some of his pocket money to grown men who have probably experienced the excruciation of life in ways he never will. I suggested a bunch of other worthy causes, charities and recipients? Nope.

For weeks, his idea didn’t go away.

He put his money in a ziplock bag and kept pestering me until I capitulated and said, ok, today’s the day. I had just fetched the boys from my mom’s place and Scott was wearing undies and slops. He didn’t see this as a problem. I pulled over in the dust. He got out the car and ran over to a man who leapt to his feet smiling as wide as all Africa. It was pretty bizarre. It was like he’d been expecting the blonde kid in underwear on a hot, random Tuesday. There was no awkwardness. No need for explanation. No condescension. It was just a God thing. The mystery of simple faith and straightforward faithfulness, received.

I underestimate the power of the Holy Spirit in the lives of my kids. However limited their understanding of salvation (because, does anyone ever understand the depth of our depravity or the measure of God’s grace?), if they’ve accepted Jesus, then I should trust that they’ve received His Spirit, and that He will guide them into all truth, lay His desires on their hearts, and prompt them to do His will.

It seems to me like the most common answer to [What’s God’s will for my life?] is ‘If it’s God’s will, He’ll open the door. If it’s not, He’ll close it.’ That sounds good. But I don’t think it’s biblical. Sometimes God opens the door. Other times, He wants you to kick it down.

He goes on to explain 1 Samuel 14, where determining God’s will wasn’t as easy as waiting for an open door to amble through. It was choosing the hardest of two options.

God does open and close doors, and sometimes that’s an indication of His will for us, or for our kids. But God seldom calls His people to take the path of least resistance. All sorts of crazy, stupid, tempting, easy-as-pie doors stand wide open all day, and it’s definitely not His will for us to slide through all of them. And sometimes a door is shut tight and no one else thinks it’s a good idea to bash it down because why pick the hard way? Why pick the irrational, inconvenient or embarrassing way?

I’m trying to remember, in these days of small beginnings, that God is much more powerful than me to will and to work for His good pleasure through a child surrendered to Him with the faith of, well, a child.

So here’s how I’m preaching Psalm 37 to me and my boys:

1 There is a God who knows your name.

He loves you. He has plans for you.

The Lord directs the steps of the godly. He delights in every detail of their lives. (Psalm 37:23)

2 Ask Him to show you His will for your life.

Love Him with all the bits of you, in all the parts of your life, in all the ways you know how. Trust that He’ll put His desires on your heart.

Take delight in the Lord, and he will give you your heart’s desires. Commit everything you do to the Lord. Trust him, and he will help you. He will make your innocence radiate like the dawn, and the justice of your cause will shine like the noonday sun. Be still in the presence of the Lord, and wait patiently for him to act. (Psalm 37:4-7)

3 You’ll know His will because it will be what you WANT to do.

Or it will be what you know because you know He wants you to do. Sometimes it’ll be natural. Doors will swing wide. Other times, God will call you to kick down the door, because not everyone wants to see God’s Kingdom come. There will be resistance. Be brave, little man. The joy of the Lord is your strength.

Though they stumble, they will never fall, for the Lord holds them by the hand. Once I was young, and now I am old. Yet I have never seen the godly abandoned or their children begging for bread… They have made God’s law their own, so they will never slip from his path… Put your hope in the Lord. Travel steadily along his path. (Psalm 37:24, 25, 31, 34)

I’d love to hear your thoughts on this? Especially parents who are further down the road than us?

Don’t forget that for the month of February you can pick up Dragons and Dirt on Kindle for the super low price of just $3. Share with someone who wants to make the world a better place? Half my royalties go to training preschool teachers in an under-resourced community.

You can also get Dragons and Dirt right here, if you’re in SA.

Stop hiding from your husband OR: How to be his girlfriend