How to be a hero OR: Bible Barbie doesn’t exist

Part of my obedience journey this year is to pray for my single friends. Not because married means arrived or complete. But because I know that they hope to have someone who will see their brave hearts and be brave enough to live brave with them as lover – ally – hero – friend. And because in the wow moments of their rich and beautiful lives they hope to have someone with them to say, like, ‘wow.’

Murray comes home from Sani2C a hero. The boys want to be just like Dad. Cam rides 140 metres without his training wheels, not knowing where he is going and despite the odds blurred against him. He wants a CamelBak like Dad’s so that he can also ride Sani2C. Scott sits down to Sunday lunch – ‘Wait!’ – gets up – comes back wearing one of Murray’s medals – sits down again – ‘Now I’m ready.’

Commit to the strain of the hills and the rhythm of the flats and the thrill of the downs. Commit to knowing you can’t fall further than the ground. Commit to pedalling, and then some. Just. Commit. 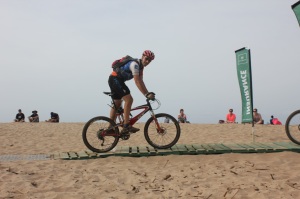 Medal still swinging close to his knees Scott mops the kitchen floor after lunch. Cam sweeps. The floor looks far – far – worse afterwards. It’s all good. They’re mopping and sweeping because they’ve seen their Dad commit. Commit to downsizing on his race registration – ‘large’ to ‘small’ – so that I could get the cool sponsored gear. Commit to saying no to extra training and yes to time with us even though that kind of commitment would cost him pain on the 40km uphill of Sani’s Day 2. Commit to taking the boys for haircuts and breakfast so that I could help manoeuvre a friend’s emergency baby shower. Commit to getting them to glue their build-it-yourself animal models when it would have been quicker, cleaner and less stressful to have glued it all himself. Commit to washing dishes because I have bronchitis and I’m breathing fumes from the nebuliser which is only slightly sexier than expressing breast milk.

They’ve seen him commit to things that don’t win medals.

We lie in the dark and talk about mountain biking and the soup I made for supper and what might possibly be wrong with the world and the church and the men to have left too many beautiful women longing for love. And he says that maybe it’s because it’s easy – even selfish – to be a hero committed to physical courage. But that committing to moral and relational courage day after day is the real freedom fight.

Because heroes have the courage to commit.

Know some heroes? I’d love to hear from you. And thanks so much for reading today. You can follow the #5minutes4freedom series on facebook or twitter, or sign up to get these posts by email.