It’s not cool to pass out at your kids’ swimming gala.

If you’re a migraine sufferer, you know the drill. A few co-morbid triggers (e.g. stress + not-enough-food + not-enough-sleep; or no-aircon-in-the-mall + too-much-caffeine) induce half your face to start seeing the world in blotches. You quickly eat and take meds to stop the migraine in its tracks and sometimes you do.

But sometimes you don’t.

Which is when the pain slides dangerously up the back of your neck and into your brain.

That was me at the swimming gala. I took pills. One friend gave me food and water. Another friend gave me an icepack. And I was all, No no I’m good. Super relaxed. No worries. Except maybe I’m going to get off the grandstands now in case I vomit. 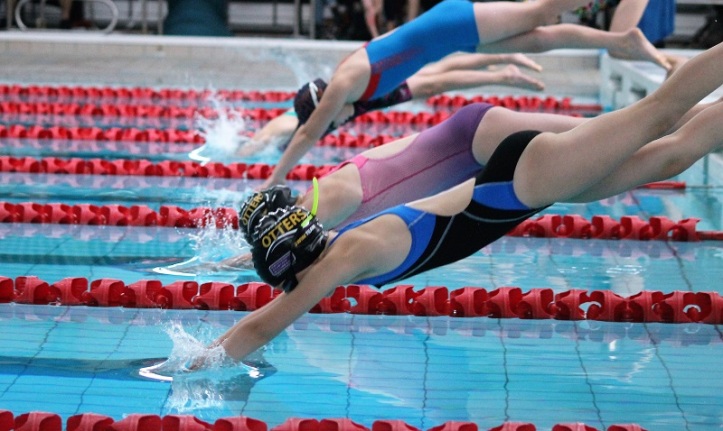 My husband and my parents had left the gala a little earlier and I was responsible to get my kids and my sister’s kids home. Which would involve driving. Which was problematic.

I lay down behind the grandstands because I’m classy like that. Phoned my sister and mumbled about Not driving. Come quick.

Of course, she said.

I don’t remember much after that, but here’s what I learned from what I do.

Sometimes with migraines, I lose feeling down the left side of my body. I couldn’t feel my arm. Couldn’t lift it. Pain is one thing, but feeling out of control of my body makes me sad and panicky.

It also felt like my brain was split in half. One side was slurring, Get it together! Sshtand up! Get over it! You’re causing a shhcene! You’ll embarrass your ssshhildren!

The other side was remembering how earlier in the day I’d watched a boy who’d obviously watched too many Olympic swimming finals. He won his race by half a body length. Took off his cap and hung on the lane ropes like a pro. Then turned to the stands and shook a triumphant fist in the air. He did it again on the podium. And I was like, Dude. It’s the inter-house gala. The primary school inter-house gala. You half expected the camera to pan to his hardcore, emotional coach and openly weeping mother and show it all on the big screen. But there was no big screen, because again, the primary school inter-house gala.

Lying in the dust behind the grandstand, I couldn’t raise a finger never mind a fist. And I had the thought that, whenever we raise our fists – in arrogance or anger – it always diminishes us. Makes us look laughable and everyone’s cringing. My didactic brain-voice said to me, Never mind about the lame arm. Always better to keep your fists down.

There were far away voices – lots of them – loving concerned familiar voices – and at one stage I realized one of the voices was talking to me. Not sure what the voice said and what I said back. Someone else poured water on my clothes. That was awesome. My sister and another friend half-carried me to the sick bay.

And I was so thankful.

The awake, philosophical side of my brain said, You can’t do a thing on your own. You desperately need the people God has put in your life. Take that, ego!

So later when the same friend who had unbeknown to me wandered round the school car park bleeping my keys until my car bleeped back and she could retrieve my house keys so someone could drive me home – when she texted to say she was having pizza delivered to us for supper I swallowed the last of my pride and said, I accept! Thank you thank you!

I can crush a to-do list. But when you’re lying in the dust nothing on your list matters. Incapacity distils importance like nothing else. You don’t think, Must phone the guy about the dishwasher! You think, Are my kids safe? Ok cool. I can die now.

This was just a migraine. No one was dying. But I sometimes look at my goals and dreams and to-dos and think, If I die tonight, none of this will matter. No one will even need to follow up on most of this stuff. All that matters is that as far as it depends on me, I’m at peace with everyone, and everyone I love most, knows it.

The most terrifying thing about a bad migraine is that I lose my words.

Words are my thing. My bread and butter. My soul oxygen.

And lying there surrounded by lovely friends, I didn’t know a single name. Couldn’t say my sister’s name. Our kids’ names. I had to think and think and think and fight to get the sounds out and they sounded wrong. Ca-me-ron. Mea-gan. (Really? That sounds weird. Are those their names?)

Someone said, ‘Coralie’s coming.’ And I thought, Coralie. Is that my sister? Yes. It sounds right. I think that’s my sister.

Plus I kept saying book instead of car like I’d had a stroke.

God doesn’t usually speak to me in the shower. Some people are very spiritual shower-types. Not me. God usually speaks when I’m wiping counters or mopping floors. He manages dirt in my heart when I’m managing dirt in my house. But on Thursday night in a showery attempt to wash off the aftermath of migraine aura I heard Him –

I give you all the words.

And there it was. The acute awareness that not one of us has one thing we did not receive (1 Corinthians 4:7). If we forget Who our gifts are from and Who they’re for, we can too quickly start operating out of our natural abilities, and not from God’s anointing – His will, His way, in His strength, and for His glory.

This thing – it’s possibly why church history is littered with brilliant preachers who lose the plot? Dynamic communicators clever enough to come up with inspiring ideas, riding a wave of their own making. We all know those waves crash on the beach. In Normandy. On D-Day. And no matter what our strengths, none of us is above getting shot down in the waves of our delusional invincibility.

It’s not cool to pass out at your kids’ swimming gala. But I’m kinda-sorta grateful I did. So grateful it’s got me all out of words.

Please pass on this post if you think it will encourage a friend.

Check out last week’s post if you missed it! One simple, beautiful thing that might just make us successful parents? BRING IT.